Well I'm now back from my week away at Elphicks Fishery in Kent. This was my fourth trip to fish North Lake and I had been joined by 9 others to target the stocks of quality Carp the lake holds.
I'd got a couple of different ideas for this trip which I hoped will see me bank my first 30lb Carp, something that has managed to pass me by on the last 3 trips to the venue. Most of the others fishing had already succeeded in breaking the 30lb barrier so this really was something I was keen to do. My current PB before this trip was 29lbs 12ozs so I'm getting close, let's hope this trip was the one.
The first two days and nights were difficult, I only managed a few line bites and one full blown run, which came to nothing. It was much the same for everyone else on my bank despite us using a variety of baits.
Eventually I was woken in the early hours with a screaming 'one toner' which resulted in this little beauty. I had changed to smaller baits, using 2 x 10mm Cell boilies, and this turned out to be a good decision. 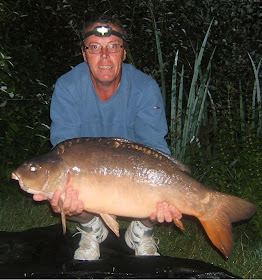 26lb Mirror
Over the next couple of days my change to the 10mm boilies proved to be the right one and despite the lake fishing hard on our bank I caught a couple of super fish. The first a lovely Mirror with beautiful scales along it's back and then a new PB Common. 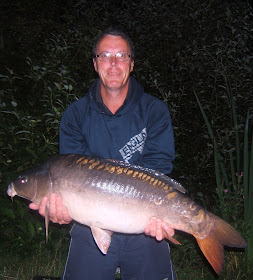 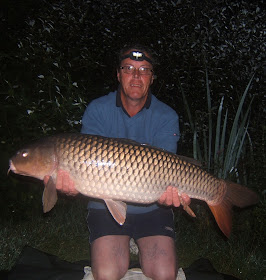 Common Carp 27lbs 2ozs (PB common)
The next day and night passed without much in the way of action apart from a missed run in the early hours which despite the reel screaming and line pouring from the reel I struck into nothing.
Finally I managed a daytime run and after a long hard fight this old looking warrior graced the net. I was quite surprised as it's not normally the sort of fish that you catch from commercials. 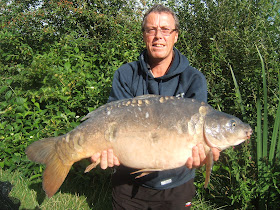 Common Carp 24lb 20z
Saturday morning was warmer than it had been for a couple of days and I knew the fish would be moving through my swim heading for the shallows so I baited more heavily in the hope of halting them in their tracks as they went by. I noticed a lot of fizzing over the left hand baits so recast and within and hour the reel was screaming again. After another hard fight, this time in front of an audience (the wives and girlfriends had come to see us) this Common was in the net. 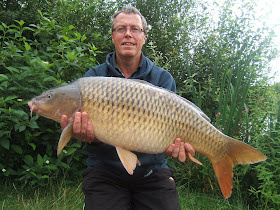 Common Carp 24lb 2ozs
Just as it was being placed on the unhooking mat the middle rod was off, so I asked Jamie to look after it while I attempted to land the second one. This one really did not want to come in and on more than one occasion tried to get in the bushes to my left. Finally it was in the net and turned out to be my biggest fish of the week. 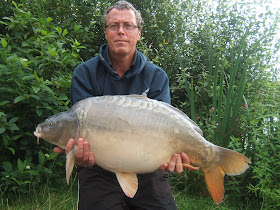 Mirror Carp 27lbs 8ozs.
As you will have worked out by now that elusive 30lb Carp is still a thing of my dreams but I'm sure it will come sooner rather than later. I did catch a couple of other fish, an 8lb Mirror Carp and a new PB catfish...........a massive 6lbs 3ozs !!!!!!!! A young lad (10 yrs old) on the other bank had one of 63lbs, it was longer than him when he laid down beside it.
I've learnt a lot since I got back in to Specimen Carp fishing and have been trying to put this knowledge to good use. It's been working quite well up until now and I must thank Jamie and Luke for their advice and guidance. I am however, pleased to say the decision to use smaller baits was mine, and a decision the others followed with success.
Hopefully I'll be back having a crack at the fish at Elphicks later in the year, this time fishing either West End or Pullens lakes. They may not hold a 50lb fish but there are a lot more 30's and 40's to go at.
Vince. @ 16:32